“Smile” seems like an unusual title for a blog post about a day when we visited both Yad Vashem and Har Herzl, but bear with us for a bit, and you’ll understand.

Our tour at Yad Vashem–Israel’s official memorial to victims of the Holocaust–began in the prism-like Holocaust History Museum. The floor of the museum slopes downward, starting with a haunting black-and-white slide reel of everyday life in pre-war Europe. Visitors descend chronologically into the darkest history of the Jewish people, reaching the lowest point with exhibit halls about the death camps. The floor slowly begins to ascend again with Nazi Germany on the brink of defeat, and you exit the museum to a dramatic view of modern-day Jerusalem. It’s a reminder of why the State of Israel exists and symbolic of the passage of the Jewish people from exile and destruction to rebirth. 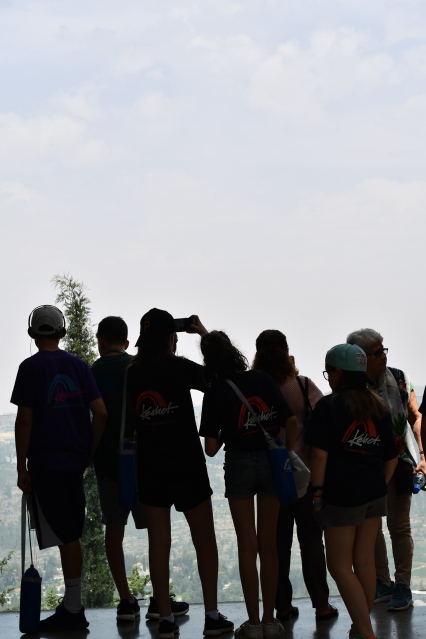 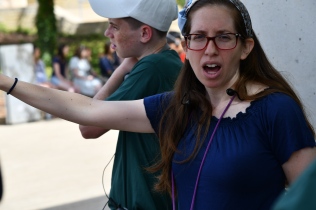 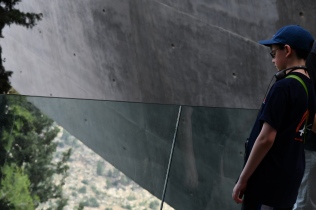 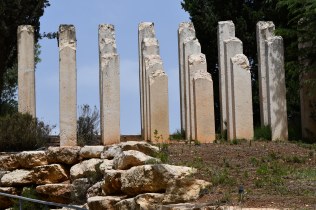 Our guide’s narrative about the rise of Hitler to power, anti-Semitism in Europe, and the experience of the Jews both during the Holocaust and immediately after the war reinforced just how very much the 8th graders have learned over the past two years in Mrs. Goldblum’s Facing History and Ourselves course. They came prepared with the knowledge to pose insightful questions and to answer the questions they were asked.

At Yad Vashem, we also visited the Children’s Memorial, hollowed out from an underground cavern in tribute to the approximately 1.5 million Jewish children who were murdered during the Holocaust. Memorial candles are reflected infinitely in the darkness, creating the impression of millions of stars shining. The names of murdered children, their ages, and countries of origin are heard in the background. The 8th graders were challenged to each remember one name spoken to carry forward with them and reminded that their future children will never have the privilege of meeting a Holocaust survivor. They were also reminded by the tour guide of their responsibility to lead lives worthy of the memory of the six million as Jewish people, as citizens of democracies in the United States and Israel, and foremost, as human beings.

From Yad Vashem, we proceeded to Har Herzl, the site of Israel’s national cemetery named after Theodor Herzl, the founder of modern political Zionism. Herzl’s tomb lies at the top of the hill. With distant thunder echoing in the background, we talked about his life and impact, and listened to a recording of the United Nations voting on establishing a Jewish State in Palestine–the realization of Herzl’s dream 50 years after his death. 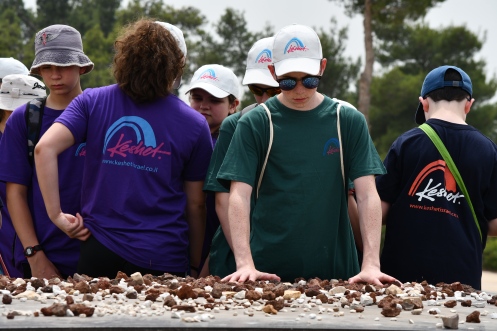 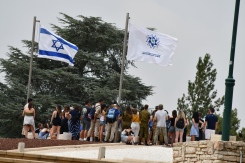 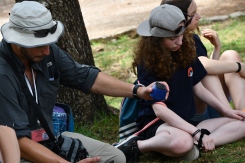 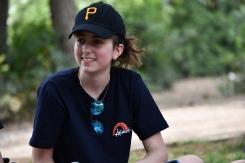 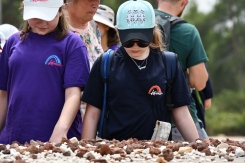 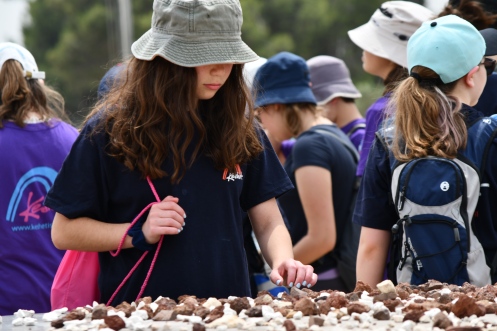 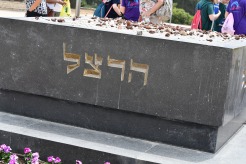 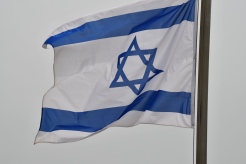 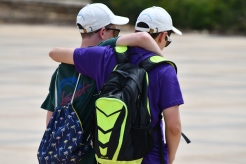 Mt. Herzl is also the burial place of five of Israel’s prime ministers, as well as other prominent Jewish and Zionist leaders. We learned about Golda Meir, Shimon Peres, and Yitzhak Rabin. We saw a memorial to Holocaust survivors, the last remnants of their families, who joined the ranks of the IDF and fell in battle. We visited the grave of Michael Levin, a Philadelphia-born “lone soldier” killed in the Second Lebanon War. 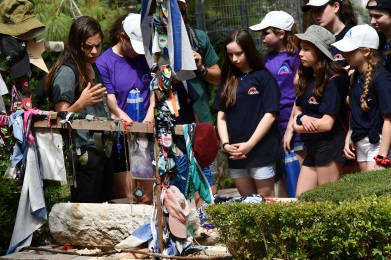 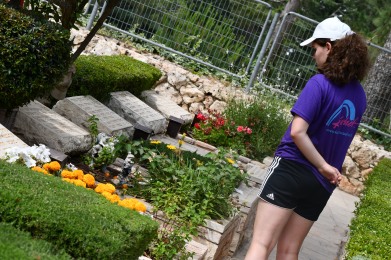 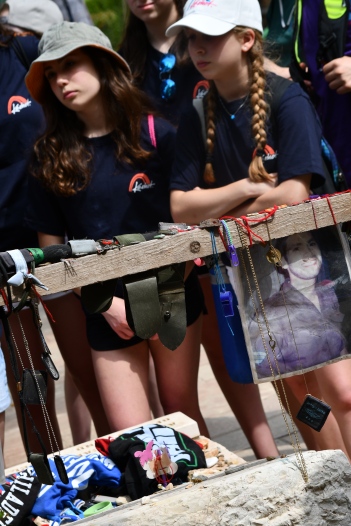 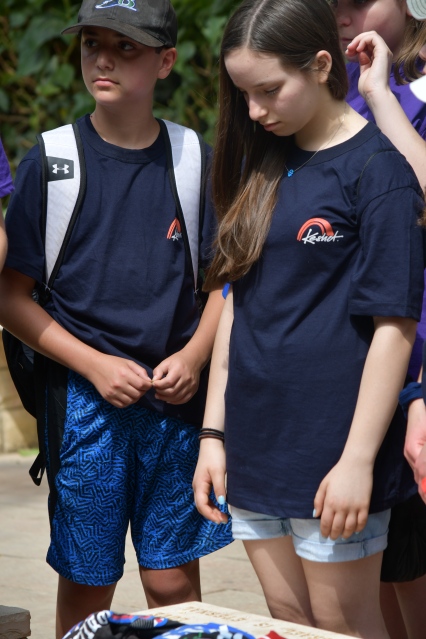 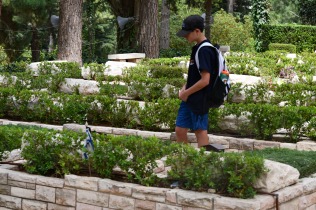 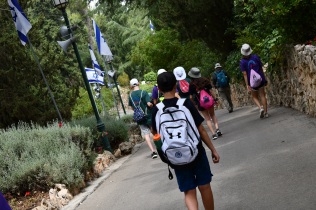 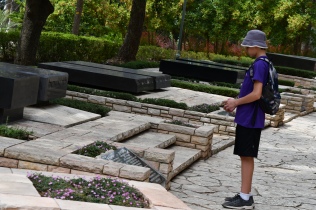 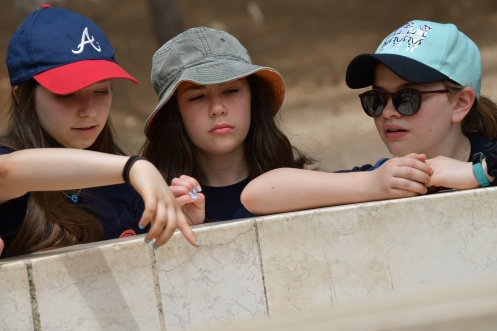 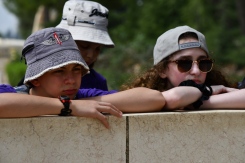 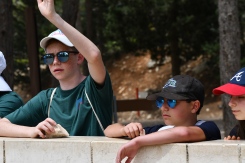 Israel’s reality suddenly became very palpable here in this place of remembrance filled with the graves of those lost too young fighting for Israel, including Staff Sgt. Ronen Lubarsky z”l, who died last Saturday after being critically injured when a marble slab was dropped on his head during a military operation.

Eitan then shared with us his personal story of loss and why Har Herzl is a reminder not to take anything for granted. He talked about his late friend and fellow soldier Staff Sgt. Liel Gidoni z”l, who was only 20 years old when he was killed in a terrorist firefight on August 1, 2014. Eitan recounted his friend’s infectious smile, even in the most difficult moments, that gave everyone who had the privilege to know him the strength and optimism to continue. He inflated a purple balloon at Liel Gidoni’s grave printed with a message about the power of a smile. “In death, they commanded us to live,” as the poet Bialik wrote. “So with the help of God may we will be able to fulfill this will of Liel and that we will be privileged to smile and rejoice because in his death he commanded us to continue to smile,” Eitan said. 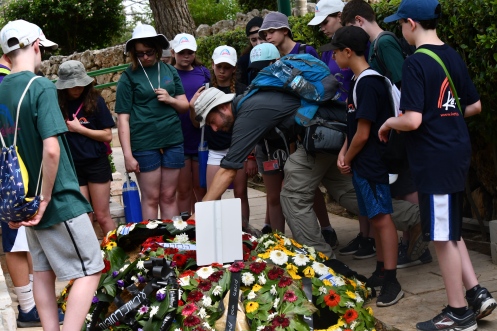 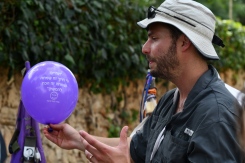 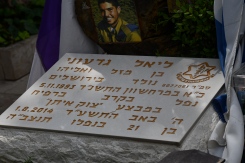 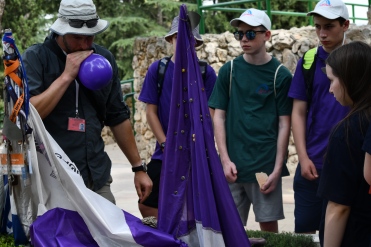 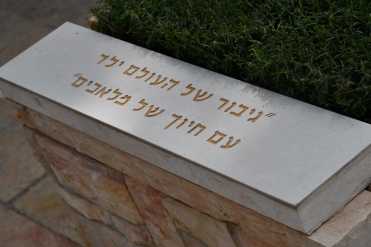 “Hero of the world, a child with the smile of angels”

After an emotionally wrenching day, we lifted our spirits with a Chesed project at Pantry Packers in Jerusalem, allowing us to make a meaningful contribution to Israeli society even during our short time here. Pantry Packers is the food distribution arm of the social services organization Tzedakah Central/Colel Chabad. Pantry Packers delivers monthly crates of food and household supplies to Israel’s poorest families and senior citizens. We had the opportunity to be “pantry packers” ourselves to fill bags of couscous, barley, and other grain that will be distributed to Israelis in need.

Our first instruction was to don our hairnets, gloves, and aprons. The second instruction came from the Rambam himself. On Maimonides ‘Ladder of Charity,’ the greatest level of giving is to help another to become self-supporting by a gift or a loan or by finding employment for the recipient. A lesser, but also meaningful, rung on the tzedakah ladder is to give inadequately, but to give gladly and with a smile.

Today we smiled while we worked. See for yourself.