The beginning is a very good place to start. So we began “where it all began” this morning, leaving the 21st century to step back in time 3,000 years to the reign of King David in biblical Jerusalem. It was on the hilltop where we stood today that King David conquered the “Fortress of Zion” from the Jebusite king, establishing Jerusalem as the unified capital of the tribes of Israel and building his palace. Looking deeper, we began to see the ancient landscape of the city, as David himself described it in the Book of Psalms: “Jerusalem, mountains surround it, and Hashem surrounds His people, from this time and forever.” 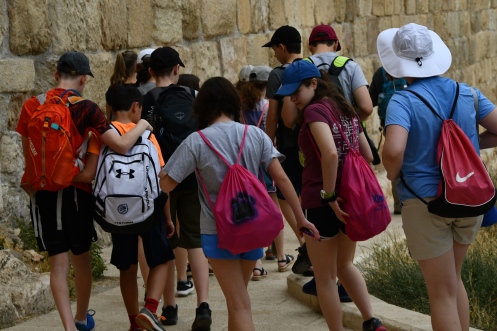 Today, the City of David is the site of a complex archeological excavation, where new and wondrous discoveries are exposed each year we return. Using the Tanakh  as our guide, Eitan pieced together some of the history of the site, including King Solomon’s construction of the First Temple just outside the City of David on Mount Moriah. 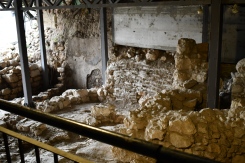 We then continued into the period of King Hezekiah, who fortified the city against the invading Assyrians and, to protect his water supply, rerouted the waters of the Gihon Spring into the city about 2,700 years ago through an underground tunnel known as Hezekiah’s Tunnel.  An inscription engraved in the wall of the tunnel teaches us that this impressive feat of engineering was accomplished by carving simultaneously from both ends until the workers met each other somewhere in the middle. 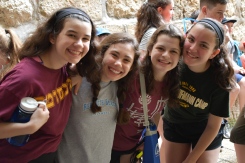 We walked through the 1,750-foot ancient tunnel one direction only, making our way through the knee-high cold water of the Gihon Spring in the darkness with only glow sticks to illuminate our way, many of us singing Hebrew favorites at the top of our lungs. At the end of the trek, we reached the Siloam Pool, where we dried our feet and celebrated our successful walk, with varying degrees of adrenaline and relief.

Flash forward to the Second Temple period. We continued walking underground–this time in a dry(-ish) tunnel–until we found ourselves at Robinson’s Arch, a monumental staircase carried by a wide stone arch that stood at the southwestern corner of the Temple Mount. It was built as part of the expansion of the Second Temple initiated by Herod the Great. We then climbed upward into the Jewish Quarter of the Old City for  lunch, followed by a quick trip to Mahane Yehuda to stock up on snacks for Shabbat.

Soon, it is off to the Kotel for our first Kabbalat Shabbat together in Israel, which is sure to be memorable. Tomorrow, we will attend Shabbat tefillot at Moreshet Israel, followed by a relaxing afternoon with games in the park and some down time before we continue our exploration of the Old City on Sunday.

Signing off until then, the CDS Class of 2018 wishes all of our family and friends a Shabbat Shalom!