“When I will be 20 years old,
In a motorized bird I’ll sit,
And to the reaches of space I’ll rise.
I will fly, I will float to the beautiful faraway world
And skywards I will soar.”

It’s hard to believe our two weeks in Israel are nearing an end, but yesterday we celebrated our final Shabbat together in Jerusalem, with services in the morning at Moreshet Yisrael, followed by plenty of noshing throughout the day and free time in a nearby park. After Havdalah, we headed back to Ben Yehuda Street for dinner and, of course, more bargain-hunting.

This morning, we began with a Chesed project at Pantry Packers in Jerusalem, allowing us to make a meaningful contribution to Israeli society even during our short time here. Pantry Packers is the food distribution arm of the social services organization Tzedakah Central/Colel Chabad. Pantry Packers delivers monthly crates of food and household supplies to Israel’s poorest families and senior citizens. We had the opportunity to be “pantry packers” ourselves, donning gloves, aprons, and hairnets to fill bags of rice that will be distributed to Israelis in need.

It was an uplifting way to spend what became an emotionally wrenching day at Yad Vashem and Har Herzl. Our tour at Yad Vashem–Israel’s official memorial to victims of the Holocaust–began with hearing the story of Abramek Koplowicz, a Polish boy who was incarcerated with his family in the Lodz Ghetto. In 1944, he was deported with his father, Mendel, to Auschwitz in the last transport to the death camp from the ghetto. Upon being conscripted into forced labor at Auschwitz, Mendel left his son behind in the barracks to try to protect him. When he returned, he discovered Abramek had been sent his death in the gas chamber. He was 14.

Miraculously, Abramek’s half-brother later discovered a notebook of poetry originally written in Polish by the boy that their father recovered after the war from their home in the Lodz Ghetto. The notebook is on display at Yad Vashem. Our tour guide read to us Abramek’s poem “Dream,” excerpted above. Abramek says, “When I will be 20 years old”–not “If I will be 20 years old.” He remained full of hope for a future that was never realized.

We then entered the Children’s Memorial,  hollowed out from an underground cavern in tribute to the approximately 1.5 million Jewish children who were murdered during the Holocaust. Memorial candles are reflected infinitely in the darkness, creating the impression of millions of stars shining. The names of murdered children, their ages, and countries of origin are heard in the background. We were asked to each remember one name spoken to carry forward with us.

We then navigated through the prism-like triangular Holocaust History Museum. The floor of the museum slopes downward as visitors descend into the darkest history of the Jewish people, and then begins to ascend again as the triangle opens; you exit the museum to a dramatic view of modern-day Jerusalem. 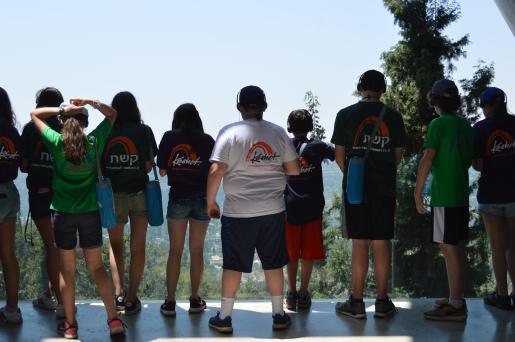 We also visited The Valley of the Communities, with the names of 5,000 Jewish communities destroyed by Nazi Germany engraved on a labyrinth of Jerusalem stone walls. For the inhabitants, our guide shared, each community constituted an entire world, with creativity, culture, religion, tradition, social life, and politics. Today, in most cases, nothing remains but the name.

From Yad Vashem, we proceeded to Har Herzl, the site of Israel’s national cemetery named after Theodor Herzl, the founder of modern political Zionism. Herzl’s tomb lies at the top of the hill. We first had a reflective discussion about our time at Yad Vashem, sharing our emotions about the experience and comparing it to the 7th Grade trip to the United States Holocaust Memorial Museum. 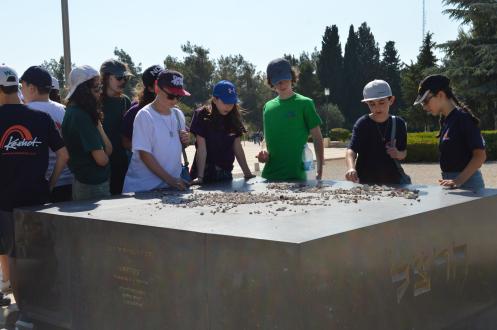 Yoni then led us on a tour through Har Herzl, masterfully weaving together the stories of some of the greatest soldiers and leaders in Israel history. Israel’s reality suddenly became very palpable here in this place of remembrance filled with the graves of those lost too young fighting for Israel, where everyone knows someone who has experienced this unimaginable loss.

We learned about Ze’ev Jabotinsky, Golda Meir, Shimon Peres, Levi Eshkol, and Yitzhak Rabin. We heard the story of Yonatan Netanyahu (Yoni’s namesake) and his courageous death at Entebbe. We visited the graves of Hannah Senesh and Michael Levin, a Philadelphia-born “lone soldier” killed in the Second Lebanon War. Yoni then shared with us his deeply personal story of loss of his mother in a terror attack after she made aliyah in 2001; her name is listed on the Victims of Acts of Terror Memorial at Har Herzl. 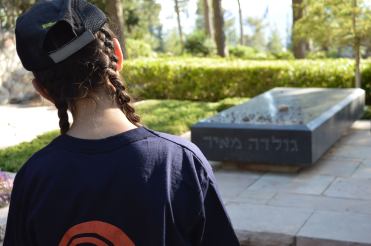 Today was hard, and these students handled the emotional challenges with maturity and respect. Tomorrow we head south to ride camels, sleep in Bedouin tents, and finally climb Masada. Here’s one final thought from Yad Vashem … 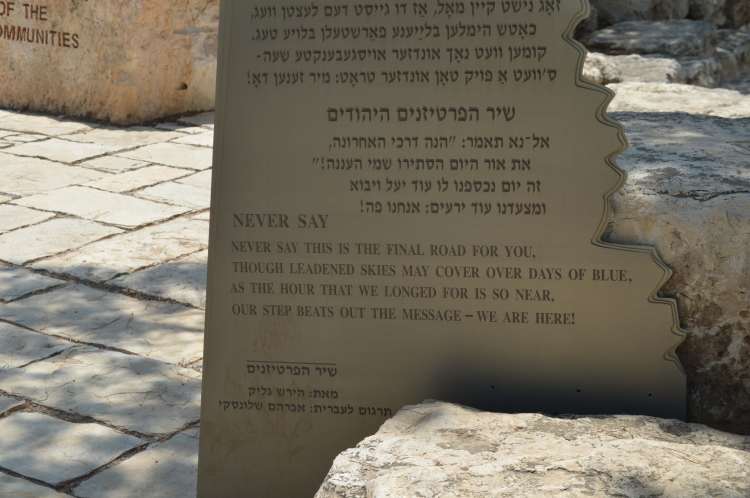