“Remember only that I was innocent and, just like you, mortal on that day, I, too, had a face marked by rage, by pity and joy, quite simply, a human face!” — Benjamin Fondane, Exodus, murdered at Auschwitz, 1944

Back home in Pittsburgh, Memorial Day to many probably meant an extra day off work or school to celebrate the unofficial first day of summer.

Here in Jerusalem, however, the CDS Class of 2016 grappled with wrenching questions and feelings about how we remember those killed fighting for their country and what it means to be a hero—both Israel and the United States. The words and photos here won’t do justice to the emotional power of our day and the transformations—both small and large, known and unknown—we all underwent as a result of these shared experiences.

The day began at Yad Vashem, Israel’s official memorial to the victims of the Holocaust. We visited the Hall of Names, with a circular hall that houses the collection of “Pages of Testimony”—short biographies of each Holocaust victim—in black binders. The ceiling of the Hall is a high cone reaching skywards, displaying 600 photographs and fragments of these pages. Eli remarked that seeing these binders together helped him to better comprehend the massive tragedy of the Holocaust. Ari said the cavernous room felt full of the memories of all of the hopes and dreams of the victims.

In seeing the Warsaw Ghetto Uprising sculpture depicting a Jewish man holding a Sefer Torah as he is being deported to his death, Dylan G. questioned how the G-d of the Jewish people could have allowed the Holocaust to happen and how survivors could maintain their Jewish faith. “I think that they could, but it would be hard,” he said.

We also visited the underground Children’s Memorial, a tribute to the approximately 1.5 million Jewish children who were murdered during the Holocaust. Memorial candles are reflected infinitely in a dark and somber space, creating the impression of millions of stars shining in the firmament. The names of murdered children, their ages, and countries of origin can be heard in the background. Avishai remarked that seeing the candles infinitely reflected in the memorial made him think about the infinite possibilities for each child’s life and how those possibilities were destroyed by the Nazis.

With the help of a tour guide, we navigated through the prism-like triangular Holocaust History Museum. Many said that seeing the photos, videos, and artifacts in the museum opened their eyes even further to everything they studied about the Holocaust this year with Mrs. Goldblum. The floor of the museum actually slopes downward as visitors descend into the darkest history of the Jewish people, and then begins to ascend again as the triangle opens. You exit the museum to a dramatic view of modern-day Jerusalem. 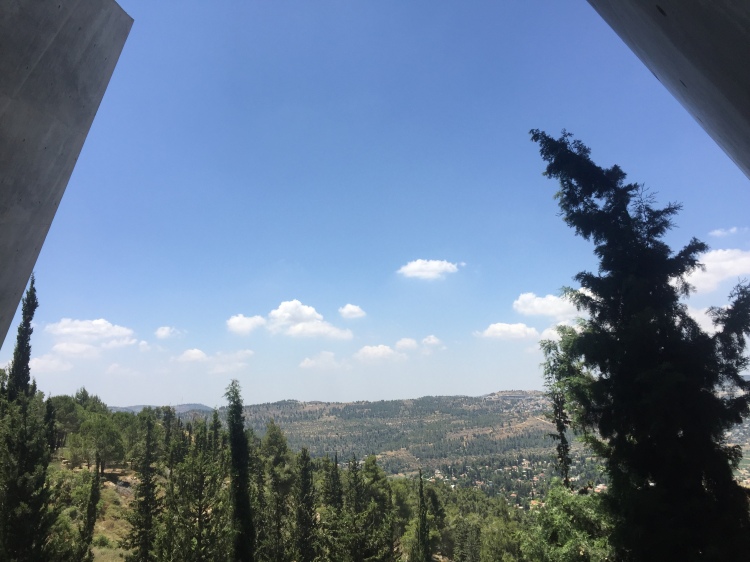 Why? Because the answer to the Holocaust is Israel, our guide Samuel explained.

From Yad Vashem, we ascended Mount Herzl, the resting place of Theodor Herzl; Israel’s presidents, prime ministers, speakers of the Knesset, and other dignitaries; and numerous soldiers and victims of terror. Israel’s reality suddenly became very palpable here in this place of remembrance filled with the bones of those lost too young fighting for Israel, where everyone knows someone who has experienced this unimaginable loss.

All of the graves at Mount Herzl are uniform, regardless of rank or distinction, and each is topped with a bed of rosemary. We visited the graves of Yitzhak and Leah Rabin, Yoni Netanyahu, Golda Meir, and Hannah Senesh and talked about the meaning of the word “hero” and how perhaps one definition might be a willingness to go out of your own comfort zone for the good of your country or for others. We also saw the resting place of Michael Levin, a Pennsylvania native killed in action in the Second Lebanon War.

Our security guard Nir—originally from Argentina—shared his moving story about the loss of his best friend in the Gaza War. He talked about why he enlisted as a combat soldier in the IDF after visiting Poland and understanding our Jewish history. Our madricha Liora shared why Yom Ha’atzmaaut is still so hard to celebrate the day after Yom Hazikaron ever since the loss of her cousin the Army. She also talked about the remains of the 127 Jews killed in the Kfar Etzion massacre interred at Mount Herzl and her family history in relation to this tragedy. Gil then found the memorial marker of his uncle, and with extraordinary courage, shared the story of his family’s loss with his classmates. 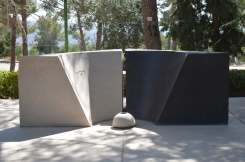 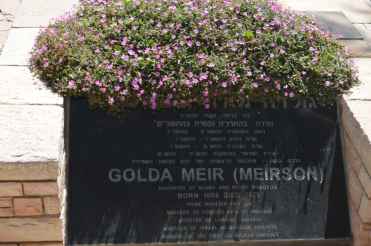 Today was hard, and these students handled the emotional challenges they faced with tremendous maturity, knowledge, depth of thought, respect, and compassion. Tomorrow we leave Jerusalem and head south to ride camels and sleep in Bedouin tents. Here’s one final thought from outside of Yad Vashem …